I love to cook and eat steak!

My favorite steak is ribeye, Shelly’s favorite is filet mignon, thanks to some good friends who introduced her to that delicacy shortly after we moved up to Oklahoma City from Lubbock, Texas. From time to time I’ll cook different cuts of steak, but normally that’s pretty standard fare like sirloins. Twice, now, however… we’ve had Brazilian style picanha on skewers, and Shelly thinks it may be her “new favorite” way to enjoy steak. The kids have really enjoyed skewer grilled picanha with chimichurri sauce too! I made a cooking tutorial video for cooking picanha back in January, and it’s my favorite cooking video (of 23 so far!) I’ve made and shared over the years. I also included the recipe I’ve used on our (relatively new) “Fryer and Ward Family Recipes” website.

I’ve been on a bit of a proverbial VISION QUEST to find and buy a new backyard smoker and grill, and in that process I’ve watched LOTS of YouTube videos about cooking generally and meat smoking and grilling specifically. (I have a public YouTube playlist of some of my favorites, if you’re interested.) I’ve been cooking steaks over charcoal on our Weber Kettle grill for almost 25 years now, both direct “hot and fast” cooking as well as indirect charcoal cooking. My main grill speciality has been “grilled chicken thighs,” which is also included on our family recipe website. I could eat those once a week (along with tacos) and be totally happy. I suppose this reveals the general LACK of sophistication of my culinary preferences, but I’m working on this… 🙂

There is a LOT more you can do on a Weber Kettle charcoal grill besides hot and fast and indirect cooking! In the last few months, I have tried techniques like “low and slow smoking” on the Kettle with the “charcoal snake method.” My first attempt at doing this with beef short ribs was NOT a resounding success, but I did learn a lot, and the results were still edible. I made a 9 minute video of those lessons learned, too.

Normally I have purchased our steaks from our local WalMart Neighborhood Market, which I’m sure will shock and disappoint some readers. We have, however, sometimes splurged and purchased grass fed steaks from B.F. Farms. They are based in Enid, Oklahoma, but have a retail outlet in north Edmond about a 30 minute drive from our house. Their beef is AMAZING, but it’s also expensive. I’ve also purchased picha steaks from “The Meat House” in Edmond and from Firebirds Meat Market in NW Oklahoma City. Firebirds is my new favorite butcher shop, but some of their cuts are $$$.

In addition to those meat sources, we’ve been happy “every other month” customers and subscribers to ButcherBox for two years now. Butcherbox sends you a box of high quality meats on the schedule you choose, and it’s EXCELLENT quality. Check them out and if you use this affiliate link, we’ll both get a $30 account credit.

Since becoming a huge fan of COSTCO about a year and a half ago, I’ve really enjoyed cooking and eating their different cuts of meat. Not only beef, but also pork, lamb, and salmon. Our New Year’s Prime Rib this year came from COSTCO. This year’s Prime Rib oven roasting recipe is on our family recipe website, previous years (and there have been several, it’s a HUGE favorite for obvious reasons) are archived here on our family learning blog. My first year to try was 2011, so I’ve been questing for the perfect Prime Rib for a decade now!

On my most recent visit to COSTCO last week, I picked up the thickest ribeyes I’ve ever purchased. They are “prime” and $16 per pound. 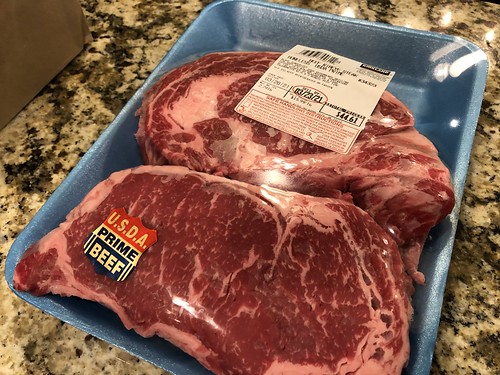 These are not inexpensive, but relative to what these steaks would cost commercially prepared at a local restaurant, I’m sure $45 is a bargain price. 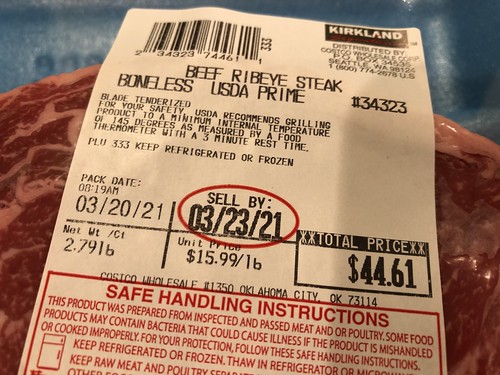 With four of us at the dinner table, I figured we’d just need two of these THICK ribeyes to have a very satisfying entree for dinner. I’m trying several new techniques with these beauties, thanks to the “SnS Grills” video, “How to Perfectly Cook Steak. Reverse Seared Ribeye using Cold Grate Technique,” and those changes are what I’d like to document now.

For the first time, I’ve salted these ribeye steaks in advance the night before I plan to cook them. The video (above) explains that by adding ONLY salt, and doing it the night before, the salt is able to permeate into the meat and will actually help the interior stay more moist during the cooking process. Per the video’s recommendatiions, I’m leaving them UNCOVERED in our fridge overnight on a wire rack. I’m going to dry them off / use paper towels to absorb any moisture from the top before grilling them, and also let them warm to room temperature (about 30 minutes) before grilling them tomorrow night. 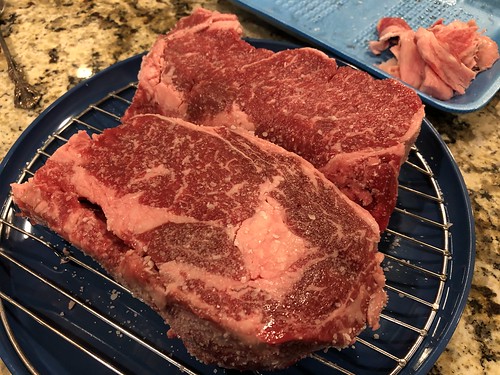 When cooking steaks in the past, I’d either season them with “McCormick Grill Mates Montreal Steak Seasoning” about 30 minutes before putting them on the grill, or (in the case of sirloins) marinate them with Mccormick Grill Mates Brown Sugar Bourbon Marinade. Results have been tasty, so I’m eager to see if this “salt with kosher salt the night before” step makes a noticeable difference.

Also following the advice of the video, I trimmed some of the excess fat from the edges of the ribeyes tonight. I have NEVER done this to a steak before, but it makes sense that the outer fat (as opposed to the inner, ‘marbled fat’) doesn’t render fully into the meat during cooking or add to the flavor. In fact, as I’ve learned watching videos about and smoking my own briskets and short ribs, exterior fat can prevent any applied rub or seasoning from penetrating the meat and therefore adding to the flavor of the final, cooked masterpiece. So, these are my first “trimmed ribeyes,” albeit very lightly trimmed. 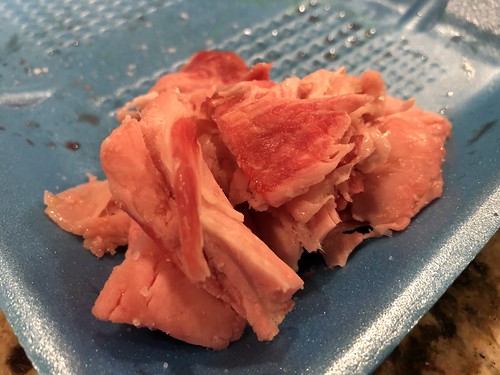 Eventually I’d love to order a $100 “Slow ‘N Sear Deluxe” to cook on my Weber Kettle, but it’s not required to cook with two cooking zones. I’m going to try and follow the instructions of the SnS video as precisely as I can tomorrow, and expect to cook indirect for about 50 minutes and then sear at the end about 4 minutes.

With a side of cast iron skillet brussel sprouts and loaded baked potatoes, it just might turn out to be a meal to remember! We’ll see and I’ll add some details about the results here afterward!

What are your favorite backyard steak grilling tricks and tips I should try?