Back in ’08 or ’09 I made four videos on how to make a couple string videos. I soon forgot about them. After some time went by youtube emailed me and said my videos had became popular and asked if I wanted to put adds on them to make some money. I said yes and signed up for the youtube google ads partnership program on my dad’s account. I then forgot about  it. A couple years went by and we received two checks for $114 and $106. My sister had also posted a video which went viral then had adds put on it while my dad never posted a video that got ads put on it. This is my journey on how I figured out i got about $200 from my forgotten youtube videos. I would also like to say that google adsense does not show exactly where the money is coming from, so I tried my hardest to get it as close to it as I can using the number of views show on the youtube demographics. Also one of my friends were trading BinaryOptions and made 634$ in 2 days, its crazy. I will try this out soon, ok back to my youtube story.

I am first going to show you how I get about $100 of the first check. You can see that in this picture my dad had something producing 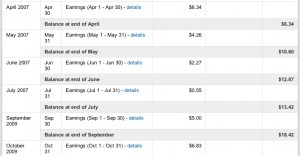 money then stopped. It then picked back up when my sisters video started producing money but my dad put ads on it after the peak and so did produce as much money as it could have, it was like getting $2000 nation 21 lenders fast. In addition, visit http://www.purplepayday.loan/ for more info. So after her video lost popularity its revenue was brought back down to about $1 and decreasing  then I am almost positive I added ads to my videos in March of 2010 because that is where the money starts to pick up slowly at first and then more as I add adds to my other videos until I had put four videos up with ads. Now, if you add all of my dad’s previous money it adds to $13.42. While if you add my sister’s money before my videos started making money she earns $15.61 and if I give her one dollor per month after that it all adds to $23.61 and that is what she earned for the first check. If you add both of those numbers together it comes to $37.03 and if you subtract that to the original $114.04 we find that I earned approximately $77.01 from the first check. Wow. That is a lot of extra money I picked-up just from the first check.

Now To prove that almost all of the next $106.58 is mine. First I will give my sister her one dollar a month for her now less-popular video. The next check came five months latter so she earns another five dollars which brings her total up to $28.61 in all. Now all the rest of the money should be mine, but if that seems a lot i will show you what makes it true. Now, if you look here than you will see that the 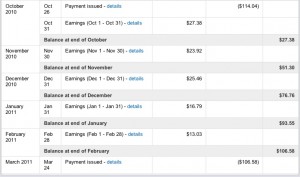 income became high for Oct. Nov. and Dec. then drops back down a bit. When you look at the number of views from my videos producing revenue you will see that the most views i have ever gotten were in Oct. Nov. and Dec. then they dropped back down a little bit. This may also be explained by more people are watching my videos so they are getting recommended to other people when they finnish a video like it.

I hope this makes it some what clear why I earned more in the last months. You can also see then drop in the las two months better from other videos but I

did not want to use up more

space in this post and because this is the video that is producing most of the money. that also leaves me with $178.59 in total in both of the checks. If you are also wondering what I am going to do with this money, I am most likely  to save $100 then buy some legos with some of the other stuff. That is how I found a bunch of unknown youtube money.